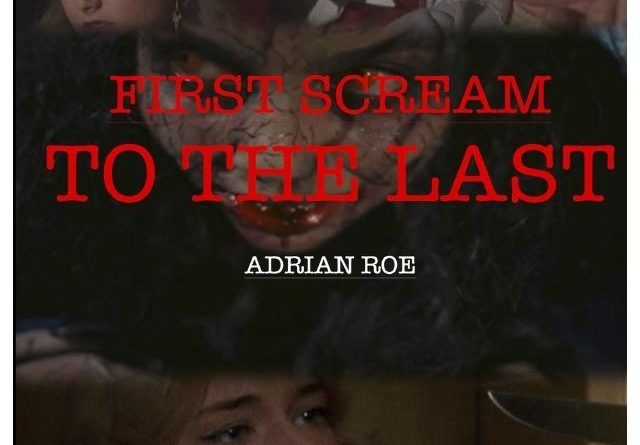 You could fill several shelves with all the books that have been written about horror films. From serious academic deconstructions, to ‘must see before you die’ style digests, there’s certainly something for everyone.

Over the last few years though, one writer has been quietly ploughing his own furrow with a brilliant series of books, boasting exclusive interviews with an unrivalled collection of horror icons.

In his first three books, the “First Scream Trilogy”, Adrian Roe takes us on a journey through the horror movies of the 70s, 80s and 90s, covering not just the hits, but also many little-seen gems. 2020’s “Bled Dry” takes a similarly fascinating closer look at the vampire movie sub-genre, while his upcoming ‘Screams For a New Millennium’ picks up the main threads with a look at horror in the 00s.

Adrian’s clearly a very busy fella, but he was still kind enough to take some time to answer a few questions that we threw his way….

Before embarking on your first book, had you done any professional writing? Interestingly enough, I simply didn’t feel the desire to write about my passion until the concept for my first book entered my head. The moment I realised that I could create my own material and in essence, write for myself, I found the drive that I needed. To be your own author with the ability to put your stamp and mark on what really matters to you is everything, and one of the things I find most satisfying about my work – it very much becomes your own brand as your work goes on. I guess the restrictions and control that you are under when writing for someone else didn’t really appeal to me at the time. I have written for various sites/magazines and undertaken other professional assignments since my books, but not before – it was my own books and the creative control that authorship gives you that got me started (and now I can’t stop!).

There are countless books out there covering the horror genre. How did you make sure that your approach was a fresh one? Upon researching other books and the market in general I was interested so see the many different approaches. On one end of the spectrum, you have very heavy pieces of academic work that will focus on just a handful of films, while deconstructing every social, political, and religious metaphor within the premise. Then there are books that simply give you hard facts and figures, more like a reference piece than anything else. There are different books for different audiences, which is great – I wanted to try and create something fun and enjoyable that would be relativity universal and appeal to all audiences. I don’t really consider myself to be an ‘academic’ and have never attempted to be so. Nor do I consider myself to be one of the best writers in the field, so I knew my books needed offer something that was uniquely theirs if I was to reach my target audience. I decided to adopt more of a documentary type approach than many of the other books out there, curating facts and figures with some background knowledge to offer the reader a better understanding of the decade in question without being too bloated. I wanted to strike the balance and create a reference piece with a bit more meat on the bones, if you will. I decided that ‘meat’ would have to be what every interesting documentary contains – exclusive interviews. I very much think of myself as the curator, more than a writer, while the real experts talk us through their experiences and offer their valuable knowledge and insight.

Was it hard to persuade any of your interview subjects to take part? I imagine some must have been extremely busy.

will always be incredibly grateful to all the artists that were kind enough to embrace my idea and contribute towards the work – there would be no books without them. I’m often asked how I persuade some the interviewees to take part, but I can’t really answer that to be honest. I think the fact that this work is not being done for profit or ‘clicks’ and is a little different from the multiple requests for interviews that they receive might help. I think if you’re just honest about would you’re doing and what you’re doing it for, it can go a long way.

Do you have a favourite interviewee that you spoke to? I enjoy speaking to all of my interviewees for many different reasons, so I couldn’t really say I have a favourite – they’re all so different. Wes Craven, Tom Holland [not that one, the other one, ed], Mick Garris, and Jamie Blanks are some of the nicest human beings I have ever worked with, Joe Lynch made me laugh more than anyone else and I am spellbound by talented actors like Julie Carmen and Jocelin Donahue. So, every individual is just as important as the next, they just offer something different in their own unique way – I’m forever grateful to each and everyone. I always say that if you want to know who the most sincere, genuine, and supportive people in the industry are, just take a look inside my books. Lovely people.

After the “First Scream” trilogy, which covers the 70s, 80s, and 90s, you then took a detour to vampire movies for your next book, “Bled Dry”. Is that your favourite subgenre? Can we expect further books covering others, such as werewolves, possessions, and so on?

I had completed The Final Scream and had actually planned to call it a day. Final Scream then became my most popular book and the demand for another was growing – so what do I do? Not only is the vampire genre one of my favourites but it is steeped in history and of such importance to the horror genre in general, it seemed such a solid and intriguing subject matter. All of my focus is on Screams for a New Millennium at the moment, but I wouldn’t rule out another ‘subgenre’ book at some point. We’ll have to see.

The “First Scream” series is growing again, with your new book, “Screams for a New Millennium”, due out before the end of 2021. How is work on that progressing? And how do you when to finally put down the virtual pen? Thanks! I am hoping to complete the first draft in August/September with a release before the end of the year. The support for this book has been overwhelming, and I have been blown away by the artists that have signed up for the project and kindly contributed. This book has quickly become my most ambitious work to date, and I have a few more surprises to announce over the next couple of months. Extremely proud of how this project is shaping up, and very excited about sharing it when the time comes. You can keep up to date with the progress here.

With regard to putting the pen down, who knows! I think if people are kind enough to keep reading my books, then I’ll keep writing them. 😊

If you could ask any horror icon – dead or alive – one question, who would it be, and what’s the question?

George Romero – what means the most to you on a personal level when you look back and see what you’ve gifted the genre?

Is there such a thing as a “Golden Age” for horror? If so, when do you think it was?

It’s a difficult question, because how are we defining Golden? Commercially, probably the ‘80s. Groundbreaking, pioneering work that moulded the genre for decades to come? I’d go with the ‘70s. It’s also subjective, so an important age to some might not have registered with someone else – very much for the individual to decide.

Hmm… that’s a good question. I do like a break from horror, and when I do it tends to be action, drama, sci-fi or comedy. I loved Once Upon a Time… In Hollywood recently, so let’s pick that one.

Thanks so much to Adrian for his time, and, let’s be honest, that final answer is pretty definitive – I reckon we have winner. And before someone “well actuallys” and pipes up about Monster Munch being a maize-based snack, not a crisp – don’t. Our site, our rules – they’re crisps.

Anyway… You can buy Adrian’s current books here, read more about his work here, and follow him on Twitter right here.